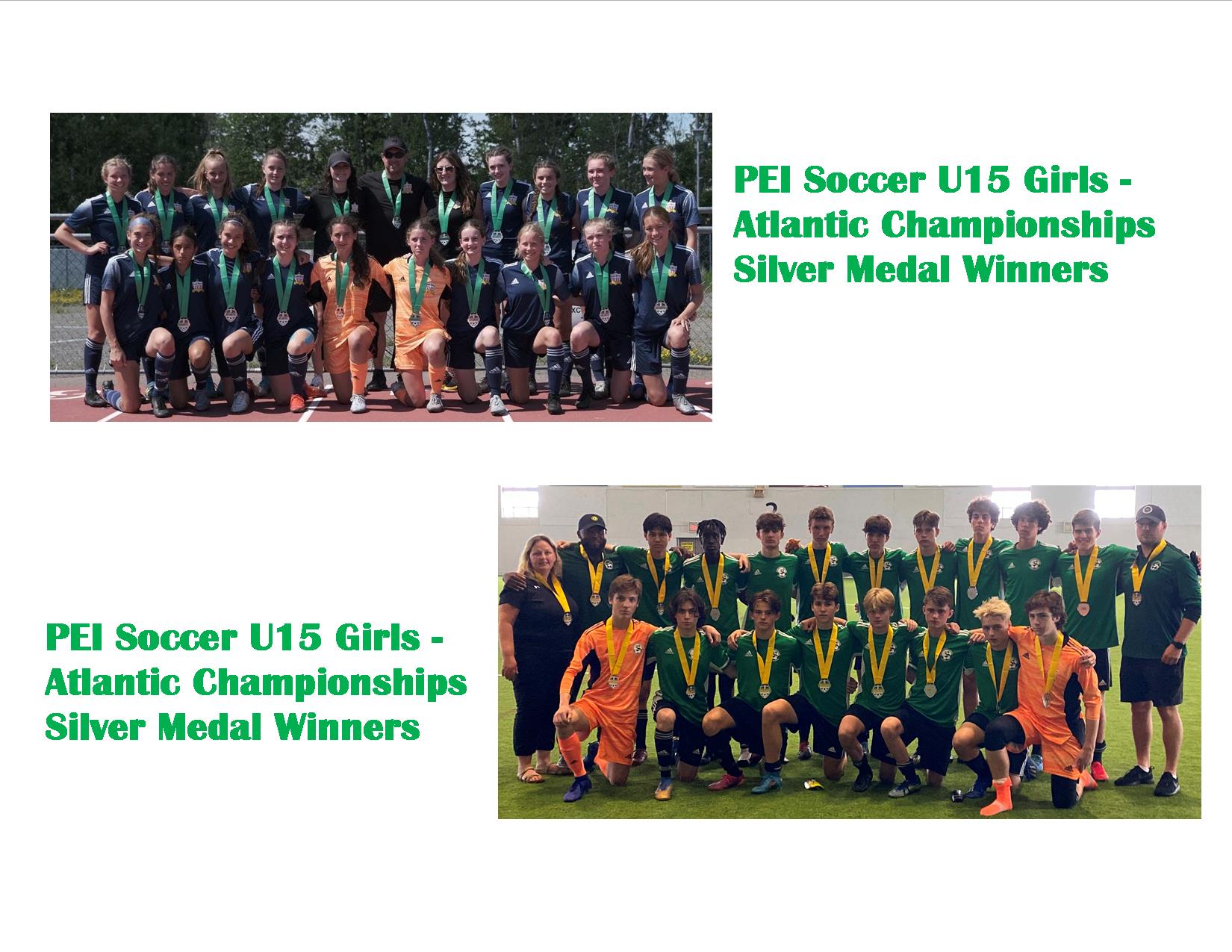 Island teams were back playing in the Atlantic Championships after two years and came back with some silver and bronze medals.

A controversial penalty early in the second half led Soccer NB to a 1-0 over the PEI U15 boys. The game was even throughout, with both teams having spells of possession in what can best be described as a back and forth affair in Halifax.

Team NB knocked on the door early against the U16 boys, striking the crossbar twice in the first ten minutes of the game. Despite the early threat, the U16 PEI team settled in and put pressure on their Soccer NB counterparts towards the end of the first half, as they started to pile up chances before the half time break. Teams were even after the start of the second half until Liam Boswall struck from 35 yards to put the U16 boys up 1-0 with ten minutes to go. The boys defended well for the last 10 to come out with a well deserved 1-0 win.

In Moncton, the U16 girls fell to Soccer NB 2-0 after 2 first half goals, and the U15 girls battled back from a 2 goal deficit at half time to draw with Soccer NB 3-3.

U15 boys were in action today versus Newfoundland Soccer. The boys went down early, conceding a goal on a scramble after a corner after both teams had chances early on. Coach Mark Caudle described the first half as “scrappy and ugly”. Shouts for a NL penalty were discarded towards the end of the half, and the U15 boys went into the break down 1-0 needing to find a response. Chances were far and few between for PEI before Duncan MacIntyre slotted past the NL goalkeeper with a 10 yard strike, before NL answered 3 minutes later after pouncing on a rebound in the 18 yard box. PEI kept up the pressure but couldn’t find a goal as the game ended 2-1 for Team NL.

Also in Halifax, the U16 boys were in action versus NFLD. Chase Bell had a goal line clearance in the opening five minutes to keep a plucky NL side at bay early. Twenty minutes into the half, NL would strike in transition as a fast move led to a goal scored from 12 yards out. 10 minutes later, NL would strike again, after an opportune bounce allow their striker to finish from in close. PEI almost answered before the half, as Jonathan Ndayegamiye blazed a shot over the bar. Coach Ceejay Amadi rallied the troops at half, and PEI started the second half strong, as Liam Boswall struck the crossbar on a shot from 35 yards out ten minutes into the half. NL managed to stem the tide 20 minutes in as they struck again after a rebound off a good save from Cam Schuman. Thomas Gagne came close to responding for PEI but was denied by the NL keeper. PEI came close towards the end of the game but couldn’t convert, as the final score was 3-0 in NL’s favour.

In Moncton, Joelle Bader smashed a stunning free kick into the top corner of the net and the U15 girls came out on top of Soccer Nova Scotia, winning by a score of 2-0. The U16 girls fell 2-0 to Soccer NS after holding them to a goalless first half.

Despite the blistering temperatures in Moncton, both the PEI and NL U15 girls got off to an energetic start. NL came close to scoring in the opening ten minutes, but Lauren MacEachern recovered well to keep the attempt at bay. Twelve minutes later, PEI generated their own chance as a short corner routine saw Joelle Bader come close to breaking the deadlock.  MacEachern was called upon ten minutes later, as she reacted smartly to get down and keep a close range header out of the net, as both team entered half time all square.

The second half saw a slower start for both team, as PEI and NL struggled to get much going in the opening minutes of the second period. PEI had the best chance of the opening stages of the second half, as a long free kick lead to a shot off the post and out for a corner. On the ensuing corner, Addison Langley managed to flick the ball on for Maiya Chaudhary who smartly headed the ball over the outstretched NL keeper to put PEI up 1-0. The game came alive after the goal, with PEI having the better chances as the game dissolved into a track meet with both teams driving forward in transition in attack after attack. PEI managed to beat back the NL team and pinned them deep in their own end for the final ten minutes to preserve their 1-0 lead and book a spot in the gold medal game of the U15 girls Atlantics.

The U16 girls from PEI held their nerve against NL, and got their reward ten minutes in when Tamara Gauthier struck from 30 yards to put PEI in front. PEI carried play for most of the first half, and was denied a second goal by the NL goalkeeper when Chloe Cudmore went in on goal. Quinn Gavin made her U16 debut and was a calm and steady presence in the first half, and contributed some excellent distribution along with some timely saves to keep PEI in front going into the break.

The second half started yet again with PEI under pressure, as NL came out swinging. Yet again the U16 girls from PEI weathered the storm, and bounced back to create numerous chances as the second half progressed. Mackensie Ramsey came off her line well in the second half, and Juliette Bader had a timely block to preserve the 1-0 win for PEI.

In Halifax, the U15 boys had a game to forgot as they fell 7-1 to a rampant Nova Scotia side. The U16 boys faired much better as they beat Nova Scotia 3-1 with ten men. Jackson MacDonald struck first, with Nathan Wheeler also finding the back of the net before the stroke of halftime to put PEI up 2-0. A goal from Chase Bell before a messy scramble led to the lone Nova Scotia goal lead to the win which see the PEI U16 boys book their spot in the U16 gold medal game as well.

The last day of the U15/16 Atlantics saw 2 of the 4 island teams fighting for the gold medal. The U16 boys were up against NL and found themselves having to mount a comeback after going behind 1-0 15 minutes into the first half. Liam Boswall struck the cross bar on a free kick towards the end of the half, but PEI went into the breakdown 1-0.  PEI continued to battle in the second half, and went close to equalizing as the island squad squandered a penalty to remain down one as the last twenty minutes arrived. PEI battled until the end, but came up short and went home with a silver medal, falling to NL in the final.

The U15 boys were looking to bounce back from their 7-1 thrashing at the hands of NS, and it seemed they were likely to as they took a 1-0 lead into the final 5 minutes only to see NS score with 3 minutes remaining to send the game to penalties where the boys unfortunately fell on penalties to NS to finish 4th at the tournament.

In Moncton, the U16 girls also faced NL in the sweltering heat. The game started quickly, with PEI having the better chances in the opening half. The first half was a back and forth battle, and PEI felt hard done by to have NL stay at 11 players after thier player was tackled from behind after being clean in on goal. Both teams entering the break tied 0-0.

The second half kicked off, and shortly into the second half PEI struck as Elisha Cameron pounced on a Georgia Doucette free kick to put PEI in front. The game then turned into a back and forth affair, with Mackensie Ramsey being called upon to make some crucial saves as the U16 girls won the game and the bronze medal over NL.

In the U15 girl’s gold medal game, NB came out flying, as they managed to score the opening goal off a finish from a wide set piece. Quinn Gavin was important in stemming the tide, as she made a few important saves in the early stages, included a 1 on 1 stop to keep the deficit at one. NB struck the cross bar once more before half, and PEI entered the break needing to find an equalizer.

Goalkeeper Lauren MacEachern was called upon early in the second half, but after the opening ten minutes of the half, she became a spectator as PEI pushed for an equalizer. The U15 PEI girls came close on a few corners, and were generating a lot of chances as the half progressed. Despite the chances piling up, PEI couldn’t find the back of the net as NB emerged victorious and the U15 PEI girls claimed silver.